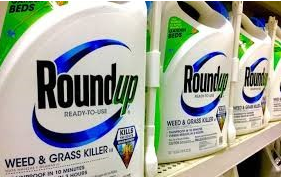 History: Roundup is the most widely used herbicide in the world and the second-most used weed killer for home and garden, government and industry, and commerce. It was introduced commercially by Monsanto Company in 1974 and is used by landscapers, farmers, groundskeepers, commercial gardeners and even home gardeners. It has been linked to a type of cancer called non-Hodgkin lymphoma.

The primary ingredient in Roundup is glyphosate, a chemical that kills weeds by blocking proteins essential to plant growth.

Agriculture use of glyphosate increased sharply since crop seeds were genetically modified to make them resistant to the herbicide. Glyphosate is now used in more than 160 countries with more than 1.4 billion pounds applied each year. About 100 million pounds are used on U.S. farms and lawns annually, according to the Environmental Protection Agency (EPA).

Studies suggest that glyphosate can also have non-cancerous effects including developmental and reproductive problems including abnormal fetal development, low birth weights, and miscarriages. Other health risks associated with glyphosate exposure include liver and kidney damage. Some countries have banned the use of the herbicide due to health concerns.

The U.S. Environmental Protection Agency (EPA) is currently reviewing glyphosate to determine its status as a carcinogen and to determine if glyphosate products like Roundup warranted a “probable human carcinogen” on their labels.

Evidence suggests a link between RoundUp and cancer. Those who claim to have suffered from unexpected side effects after being exposed to Roundup are pursuing lawsuits against Monsanto.

Side Effects: non-Hodgkin lymphoma, leukemia, B-cell lymphoma, and multiple myeloma, Other types of cancer Roundup has been linked to include brain, breast, prostate lung and blood.