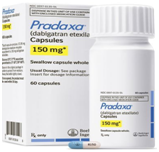 Prescribed to patients to prevent blood clots and strokes.

History: Boehringer Ingelheim Pharmaceuticals, Inc’s Pradaxa received FDA approval in 2010. In 2011 the FDA received the first report of a death directly related to Pradaxa. In 2013 the FDA added three black-box warning on the increased risk of uncontrollable bleeds, thrombocytopenia or low platelet count, as well as alerting patients that stopping Pradaxa without some form of anticoagulation increases the risk of stroke.

Boehringer Ingelheim Pharmaceuticals, Inc. settled 4,000 lawsuits for $650 million. The first lawsuit against Boehringer Ingelheim Pharmaceuticals took place in Illinois. The lawsuit claims the company did not adequately warn of the potential side effect of uncontrollable bleeding. A medical antidote did not become available for the uncontrollable bleeding caused by Pradaxa until 2015, five years after the drug became available.